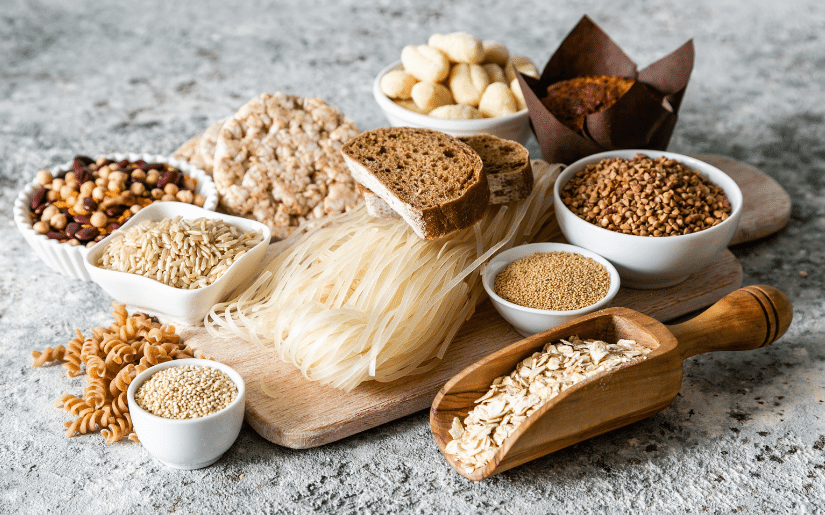 Gluten isn’t an issue for everyone, but for some, it can cause serious side effects. Symptoms like bloating, stomach pain, and diarrhea are just some of the most common concerns for those who don’t tolerate gluten well.

Although many of the most commonly used grains contain gluten, there are lots of healthy and delicious gluten-free grain alternatives. So, which grain is gluten-free? Let’s find out!

Gluten is a protein that occurs naturally in certain grains, such as barley, rye, and wheat. Gluten acts as a binder in baked goods, holding the dough together and allowing it to stretch without pulling apart. It also allows bread to rise and provides elasticity and a chewy texture.

But for someone with an autoimmune disorder known as celiac disease, the consequences of eating gluten can be life-threatening. Not only do they experience the above side effects with greater severity, but they’re also at risk of permanent intestinal damage, malnutrition, and more.

And finally, allergies to wheat proteins like gluten are quite common, forcing those with the condition to seek wheat and gluten-free grain options.

What Are Gluten-Free Grains?

Which Grain is Gluten-Free?

You don’t have to limit yourself to just one! There are a number of naturally gluten-free grains that can be enjoyed by anyone who is following a gluten-free diet, and each one has its own unique flavor and nutrient profile. Some of the most popular gluten-free grains include:

In the section below, we’ll discuss these healthy and delicious gluten-free grain options in more detail!

Whether you’re avoiding gluten for medical reasons or simply due to personal preference, planning gluten-free meals can be challenging. Thankfully, there are plenty of gluten-free grains to replace wheat in your diet. Even better, many of them are rich in nutrients and antioxidants that can significantly benefit your health!

Although quinoa is technically a seed, it’s commonly used as a gluten-free grain alternative. You’ll find it in a variety of colors, including yellow, red, white, and black. It is very rich in antioxidants and nutrients, including B vitamins, iron, fiber, calcium, magnesium, and potassium.

But one of the most exciting things about quinoa is that it’s a complete protein, meaning it contains all nine of the essential amino acids our bodies can make on their own.

Its light, fluffy texture and nutty flavor make it a great choice as a breakfast cereal, side dish, or it can be added to salads, soups, and stews. Just be sure to rinse it well before cooking to remove the bitter tasting-coating that protects the seeds while the plant is growing.

Although it has only recently begun to gain popularity in the US, millet is a naturally-gluten free grain used in Africa and India for centuries. In addition to fiber and protein, millet is also rich in nutrients like niacin, thiamin, copper, phosphorus, and manganese.

Millet can be ground into flour for baking. It is often included in gluten-free high protein breads or used in place of cornmeal in many recipes. It has a sweet, nutty flavor that works well as a replacement for rice or made into a breakfast porridge whenever you’re in the mood for something a little different.

Amaranth is one of the highest protein, gluten-free grains. Native to Peru, amaranth has been cultivated for thousands of years. In fact, many cultures in Nepal, Mexico, and India include amaranth in their breakfast porridge and use it as a staple in their cooking.

This gluten-free grain is rich in calcium, iron, copper, and magnesium. It’s often toasted to bring out its delicious nutty flavor. Often prepared as a hot breakfast dish much like oatmeal, it can also be added to salads and other side dishes.

Corn is naturally gluten-free and a great source of fiber, antioxidants, and vitamins like A, B6, and folate. Cornmeal, cornstarch, hominy, and cornflour are all made of corn and are staples in many diets.

On its own, corn makes a wonderful side dish and a popular summer treat. It can also be used to make cornbread, polenta, tortillas, and more. Cornstarch is also a wonderful gluten-free thickener for everything from soups to pie filling.

Those on a gluten-free diet can also enjoy popcorn, but be cautious of flavorings and additives when you’re not making popcorn from scratch at home.

Oats are a popular gluten-free cereal grain that offers a number of benefits for anyone following a gluten-free diet. First, oats are rich in the soluble fiber known as beta-glucan, which helps you feel full and slows down the release of blood sugar into the bloodstream.

Research shows that beta-glucan also reduces the risk of heart disease by lowering cholesterol levels. Oats are rich in minerals like iron, zinc, magnesium, and phosphorus.

When it comes to versatility, you really can’t beat oats. They’re available in several forms, from quick oats to old-fashioned oats and steel-cut to oat groats. Oat flour makes a wonderful alternative to wheat flour for all of your baked goods, too.

The most common way to enjoy oats is as a hot breakfast cereal topped with fruit and honey or maple syrup, but don’t stop there. Use oats to make homemade granola, cookies, or bread. The options are truly endless!

Most of us are familiar with this starchy grain that has been a dietary staple across many cultures for centuries. Of the more than 40.000 varieties in the world, all types of rice are gluten-free – including white, brown, and wild rice.

That said, white rice has had its outer hull removed, which also, unfortunately, removes many valuable nutrients. Brown rice and wild rice are superior when it comes to nutrition, including B vitamins, magnesium, and fiber.

The flavor and texture of rice can vary greatly from one type to the next. Some are light and fluffy while others are chewy, nutty, or even sticky. Rice can be ground into flour or used to make delicious dishes like risotto, stir-fry, jambalaya, or paella. Add it to salads, soups, and stews or serve it on its own as a quick and healthy gluten-free side dish.

Buckwheat is part of the rhubarb family, and despite having wheat in the name, it’s naturally gluten-free. In addition to being a great source of fiber, buckwheat is rich in zinc, B vitamins, magnesium, iron, and more. It may help to lower bad cholesterol levels, too.

Buckwheat has a slightly earthy, nutty flavor. When roasted, it’s called kasha and is used to make a popular breakfast cereal. Cooked buckwheat can be added to salads or side dishes in place of rice. It’s also ground into flour and used to make pancakes and other baked goods.

Teff is a tiny grain with powerful benefits. It’s rich in protein, which helps to promote satiety and increase metabolism. It’s also rich in fiber for improved regularity and blood sugar stability. Teff is also a great source of protein and B vitamins.

Teff can be ground into flour and used as a substitute for wheat flour in gluten-free baked goods. It also makes a delicious porridge, or you can mix it into soups, stews, and chilis. It’s also a fantastic thickening agent for all types of dishes.

Sorghum has been used throughout history as both a nutritious animal feed and a cereal grain. It is also used to produce a sweetener known as sorghum syrup and is even a key ingredient in certain alcoholic beverages.

There are many benefits to including sorghum in your gluten-free diet. First, this fiber-rich grain helps to stabilize blood sugar by slowing the absorption of sugar into the bloodstream. Sorghum is also rich in antioxidants that lower oxidative stress and reduce your risk of chronic illness.

Sorghum also poses anti-inflammatory properties due to its high levels of plant compounds. It’s also rich in protein and a great source of iron, making it a popular grain choice for anyone on a gluten-free vegan diet.

Due to its mild flavor, sorghum is an excellent choice for grinding into flour to use when making gluten-free baked goods. It can also replace barley in recipes like beef-barley soup.

A Note About Cross-Contamination

The grains we’ve listed above are naturally gluten-free and are considered safe for those with celiac disease, gluten intolerance, and anyone who follows a gluten-free diet for health reasons.

However, it’s important to know that gluten-free grains can come into contact with gluten during the milling process. Cross-contamination is a major concern for those on a gluten-free diet, so it’s essential to look for products that are specifically labeled “gluten-free.”

Whenever possible, avoid buying grains from the bulk bin and choose products that have been certified gluten-free by a third party. That’s the best way to be sure that naturally gluten-free grains haven’t been cross-contaminated with gluten during milling or packaging.

Answering Your Questions About Gluten-Free Grains

What’s the difference between wheat-free vs gluten-free?

Contrary to popular belief, the terms wheat-free and gluten-free are not interchangeable. Foods that are labeled wheat free can still contain other grains, such as rye or barley, that contain gluten. Always look for the term gluten-free on the label to ensure that you’re getting a truly gluten-free product.

Whole grain does not mean gluten-free. Some whole grains naturally contain gluten, and even gluten-free whole grains can become cross-contaminated with gluten during milling or packaging. Inspecting labels carefully before purchasing is the only way to ensure that whole grains are free of gluten.

Can gluten-free grains cause inflammation?

Although gluten-free grains are considered less likely to be inflammatory for most people, there are many factors that can trigger inflammation. Gluten is just one factor in the equation, so it’s important to work with your healthcare provider to determine the underlying cause of chronic inflammation.

Which ancient grains are gluten-free?

There are many ancient grains that are also naturally gluten-free. These grains are also highly nutritious and an excellent source of fiber, protein, iron, and vitamins. Here’s a list of the most popular gluten-free ancient grains.

So, which grain is gluten-free? It turns out there are quite a few options to choose from. Each one has its own unique flavor and nutrient profile, and they can be incorporated into your gluten-free diet in many ways. Give them all a try to see which ones you like best!