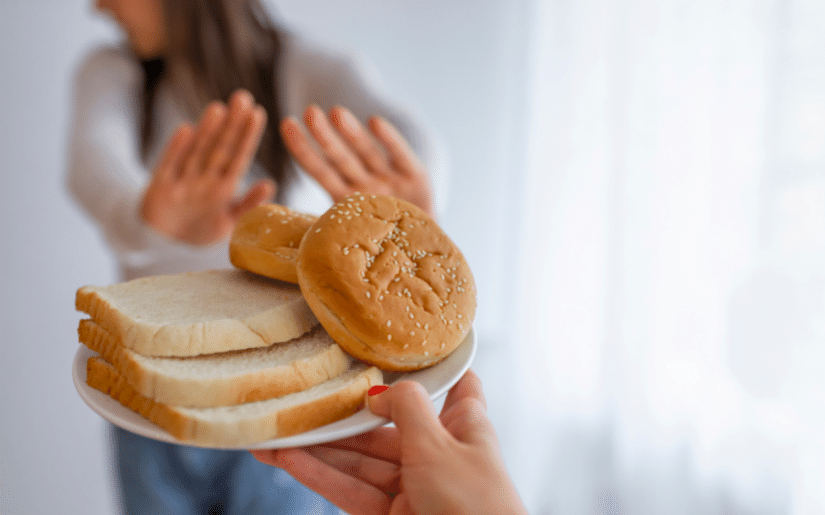 Some experts say that eating gluten contributes to inflammation, insulin resistance, and hormonal imbalances, while others argue that there’s no research to support the benefits of a gluten-free diet for PCOS.

So, should you follow a gluten-free diet for PCOS? As you’ve probably guessed, there’s no one size fits all answer for everyone. Let’s dive into how gluten and PCOS might be connected, so you can decide what’s right for you.

What is polycystic ovary syndrome?

Polycystic Ovary Syndrome (PCOS) is a condition that affects women whose ovaries produce abnormal amounts of male sex hormones called androgens. Some women who have PCOS develop small, fluid-filled cysts on the ovaries, while others do not. It is also possible to have ovarian cysts and not have PCOS.

Although the exact cause of PCOS remains unclear, many women who develop the condition also have insulin resistance. People with insulin resistance can’t utilize insulin properly, which allows it to build up in the body and can lead to increased androgen levels.

Obesity may also raise insulin levels and make the symptoms of PCOS worse. There is some evidence that PCOS runs in families, so you could be at a higher risk for the condition if your mother or sister has it.

Some women with PCOS develop serious health issues, including type 2 diabetes, high blood pressure, and uterine cancer. If you suspect that you may have PCOS, see your healthcare provider. The condition can be treated and managed with medication, exercise, and dietary changes.

So, what is the connection between gluten and PCOS? While there are no studies that specifically connect gluten and PCOS, many women experience a dramatic improvement in their symptoms when they eliminate gluten from their PCOS diet. Here’s why.

Maintaining a healthy weight is crucial for overall health, and that’s especially true when it comes to PCOS and fertility. Being overweight or obese can make your PCOS symptoms worse and contribute to irregular menstrual cycles, making it more difficult to become pregnant.

But even more than that, as many as 70 percent of women with PCOS also have insulin resistance, which reduces their ability to break down carbohydrates. Insulin resistance is a key contributor to many of the symptoms of PCOS, including acne, abnormal periods, infertility, and hair loss or increased body hair.

By eating fewer refined carbs, you may be able to reduce insulin resistance and improve your blood sugar levels, resulting in overall improvement of your symptoms.

If you are gluten sensitive and you have PCOS, following a gluten-free diet may be especially beneficial.

When you continue to eat food that you are sensitive to, your immune system overreacts by triggering inflammation, particularly in the gut. This can lead to an imbalanced microbiome and leaky gut, in addition to chronic inflammation throughout the body, and have a tremendous impact on your overall health and your PCOS symptoms.

Removing gluten and taking steps to heal your gut may reduce inflammation and rebalance your microbiome, providing long-lasting relief for PCOS.

Reduces the Symptoms of Autoimmune Disease

Hashimoto’s thyroiditis is an autoimmune disease that is common in women with PCOS. In individuals with Hashimoto’s, the immune system malfunctions and attacks the thyroid gland, leading to progressive inflammation, damage, and eventually, hypothyroidism.

Studies show that following a gluten-free diet may reduce the symptoms of Hashimoto’s and other autoimmune disorders.

Hormone disruptors are chemicals that interfere with the proper function of our endocrine system, which is responsible for balanced hormone production. In some cases, they mimic hormones the body produces naturally, leading to a release of too many or too few hormones at the wrong time.

Wheat, the most abundant source of gluten, is commonly sprayed with pesticides that can act as xenoestrogens in the body. Xenoestrogens mimic estrogen, contributing to hormonal imbalance. As you can imagine, this could worsen the symptoms of PCOS in women whose hormones are already out of balance.

Following a gluten-free diet also promotes mindful eating by encouraging you to think about your food choices more carefully. It causes you to read nutrition labels more carefully and be more mindful of the ingredients in your food.

Eliminating processed foods and focusing on a balanced, whole food diet that’s naturally gluten-free is a great way to promote overall health. That being said, a balanced diet can include gluten and be a great source of nutrition, so there’s no reason to eliminate it if it doesn’t improve your symptoms.

Following a gluten-free diet for PCOS can be challenging, mainly because gluten is often hidden in prepared foods. Cross-contamination is also an issue at home and when eating at restaurants. Here are some practical tips to help you get started with a gluten-free PCOS diet:

Common Questions About a Gluten-Free Diet for PCOS

Gluten is a protein found in grains like wheat, barley, and rye. It provides texture and elasticity in bread and other baked goods. It is often found in processed foods like bacon, luncheon meat, sauces, marinades, salad dressing, and beer, too

What’s the difference between gluten sensitivity and celiac disease?

Celiac disease is an autoimmune disorder that affects the intestines. It can lead to serious health issues like chronic fatigue, infertility, intestinal damage, chronic joint pain, and nutrient deficiencies. People with celiac disease must avoid gluten completely for their entire life.

Gluten sensitivity is much more common than celiac disease. Individuals with gluten sensitivity have difficulty digesting gluten. This can trigger inflammation in the intestine and lead to issues like chronic fatigue, digestive issues, and brain fog.

Some people with gluten sensitivity can still eat gluten occasionally in small amounts, while others find that they feel best if they avoid gluten completely.

What are the signs of gluten intolerance?

Are there any potential risks or downsides?

Many processed foods that are marketed as gluten-free are also high in added sugar to provide flavor. Increased sugar intake can lead to weight gain and worsen insulin resistance, which could also make your PCOS symptoms worse.

If you decide to follow a gluten-free diet for PCOS, focus on choosing naturally gluten-free whole foods. These include lean proteins, nuts, seeds, fruits, vegetables, and gluten-free grains like quinoa and brown rice.

Following A Gluten-Free Diet for PCOS: The Key Takeaways

Currently, there’s no scientific evidence that says every woman with PCOS should follow a gluten-free diet. However, many women with PCOS do notice a reduction in their symptoms, most likely due to their lower intake of refined carbs, an underlying gluten sensitivity, or a Hashimoto’s diagnosis.

While gluten sensitivity does not cause PCOS, it is often an underlying symptom of issues like poor gut health, which can contribute to PCOS symptoms. In some cases, eliminating gluten, even temporarily, can heal the gut and lead to lasting improvement for women with PCOS.

That said, the underlying causes of PCOS can be different for everyone. We suggest talking to your doctor about temporarily following a gluten-free diet to see if it improves your symptoms.